I’ve always considered myself a hugger… not a fighter.

I’m the type of gal who believes in positive reinforcement, optimism and the power of a smile. However, I’ll also be the first to admit that no matter how sunny one’s disposition, it’s inevitable that sometimes we allow self-doubt to creep into our mindset. We all question ourselves asking: “Am I good enough? Should I have known better? Will I fail at that?” A little self reflection can keep us honest, but too much can be hurtful and counter-productive. While on the outside we seem bright and shiny, internally we battle our own worst inner critics. We say things to ourselves about ourselves that we would never ever say to anyone else.

Why do we spend so much time and energy beating ourselves up? 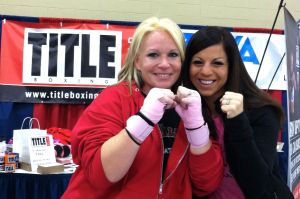 Ironically, I found myself wondering this, while striking a 100-pound punching bag. How comedic is that? Yes, boxing and kickboxing have become favorite pastimes of mine. It’s surprising since I’ve never had a fist fight, and I shy away from confrontation like the plaque. But it’s true, you’ll find me several days a week ‘hitting it hard’ at Title Boxing Club at 81st and Harvard in Tulsa.

I joined because I was ready to shake up my workout and shed a few pounds. I had become bored with the exercises I had done for years. I grew tired of running, aerobics, step class, Zumba and weight lifting, and thought why not try something totally new? The first class was free, so I literally had nothing to lose. It was time to leap out of my safe little box and into the boxing ring.

It was there I met my inner tough girl. (Who knew she existed?!?) She’s still “smiley” me, but a much stronger me. She fearlessly faces and eradicates negative self-talk head-on, and she isn’t afraid to sweat. 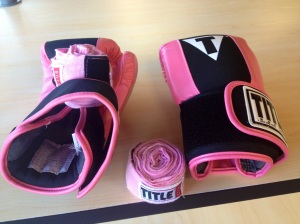 That’s a good thing because there’s plenty of sweating going on during the class. While the workout is designed for anyone, it is tough. It’s split into three main sections, but includes different exercises and combos each time you go. It starts with cardio which is typically a mash-up of things to get your heart pumping like jogging, jump rope, lunges, mountain climbers and burpees. After that, you put your gloves on (yes, mine are pink!) and go through eight rounds of boxing for 30 minutes. This was the most foreign part of the workout for me—and has become my favorite part! Through the guidance of your instructor, you hit a 100-pound bag over and over and over again. The last 15 minutes is core work, things like planks and sit-ups. It’s a great “cross fit” type workout where you can burn up to 1000 calories.

The boxing workout is an hour long class that flies by. For me, each class also unearths the self-talk going on in my head, some of it productive, some destructive. Let’s be honest, we all have our stuff we struggle with. No matter how good things are in life, everyone needs a healthy release. This has become mine. Now don’t get me wrong, I don’t envision anyone’s face on the bag when I’m striking, and I can’t imagine hitting anyone in real life—except maybe if someone was attacking me and I needed to do so to protect myself. However between upper cuts, hooks, crosses and roundhouse kicks, I now realize that I’m resolving internal struggles in that power hour, and leaving all that baggage behind when I’m done.  Not only is my physical health on a better path, but my boxing seems to keep my head on straight too.

For me, boxing is a complete workout: body, mind and soul. It’s freeing feeling.  Now, some could argue that’s due to the endorphins that exercise releases. Perhaps it’s the fact that my clothes are now a little looser, so I feel a little sassier. Or maybe it’s my new community of friends, many of who are wives and husbands, moms and dads–regular people just like me– working out their own stressful stuff while jabbing on the bags beside me. I think, just like the combos we learn in class it’s a combination of it all.

It’s been fun to get to know the feisty fighter inside me. I didn’t know it when I signed up, but it turns out, a dose of ‘tough love’ was just what this hugger needed.

There is power in what you think and say. Find your healthy release. Life is too short to  beat yourself up.

For more information on Title Boxing Club at 81st & Harvard in Tulsa check out their facebook page at https://www.facebook.com/TitleBoxingClubTulsa.

4 thoughts on “An Exercise in Tough Love”